[The following is the another of many older articles that will appear on my website. This is article was first published in Midwest Outdoors in January of 2013. Please share what you learn from these articles with your whitetail hunting friends.] 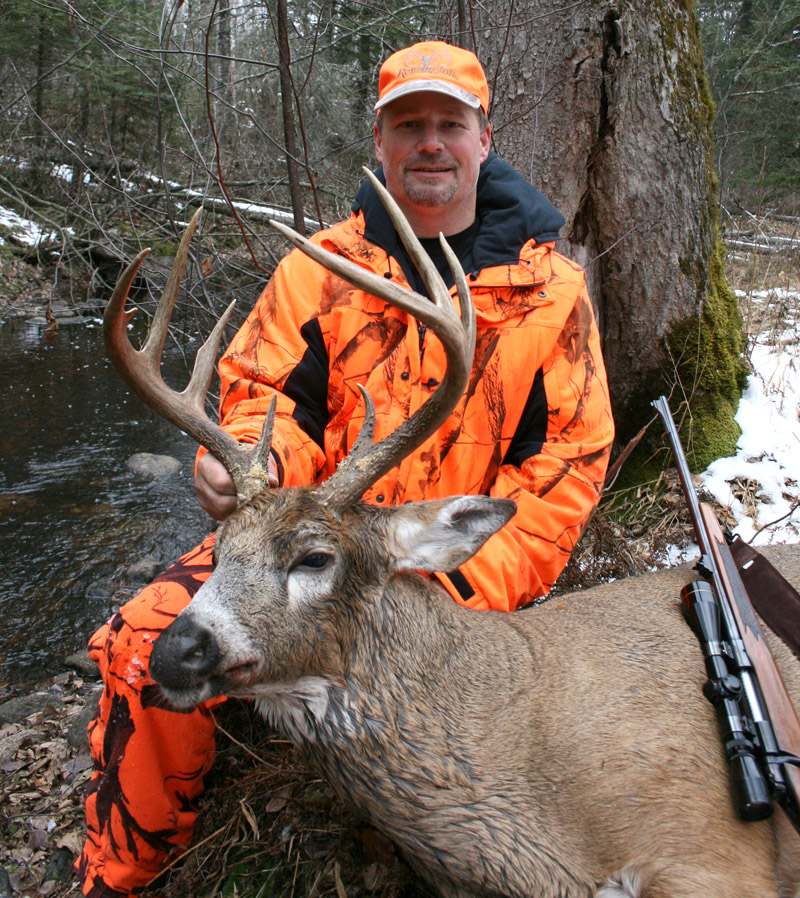 Dad, Dad, wake up!" my son Ken was saying. "You've got to come and see what I got this morning."

What?" I mumbled from inside my sleeping bag. "Another buck?"

"Yup," he answered, obviously excited, "It's big, much bigger than the eight-pointer I got yesterday, the biggest I've ever taken. You've got to come and take pictures. We'd better get going. There're wolves out there."

"On the bank of the river across from my stand at the bottom of Birch Mountain," Ken said.

When the alarm clock rang at the usual time that second morning our past deer hunting season (4 a.m.), I crawled groggily from my sleeping bag and began my usual early morning chores: lighting a gas lantern, getting a fire going in our woodstove, heating coffee water and heading outside to check the thermometer and the direction the smoke was pouring from our tent woodstove chimney. This morning, however, I was miserable: tired, aching all over and probably slightly feverish. I had spent most of the night coughing. I came to camp five days earlier with an upper respiratory infection, convinced it would soon pass. Three days of setting up camp, including cutting and splitting firewood, and our first day of deer hunting only made it worse.

"Guys," I said upon returning into our big wall tent, "I'm sleeping in this morning (a first for me in 67 years of whitetail hunting). Saying no more, I crawled back into my sleeping bag, zipped up, covered my head and promptly fell asleep, oblivious to everything until I heard Ken's voice.

Thirty minutes later we were on the trail, Ken admonishing his teenage son Ryan leading the way to walk more slowly to accommodate Grandpa who can't walk as fast.

"So it's finally come to that," I mumbled.

"Go on ahead," I suggested. "You might spot a buck along the way."

At a stop for a brief rest overlooking a musical little creek, Ken said, "That new trail (a series of long-established, connecting deer trails) Ryan and I found last month sure has paid off … two big bucks in two days, one for the wall."

"It's an old story in our deer camp," I mused. "The work of finding and cleaning (silencing) a new trail into an area not hunted before or not hunted for a long time and on or more new stand sites along the way almost always pay off."

"Fifteen minutes after crossing the creek I recognized the steep and rocky eastern slope of the high hill known in our camp as Birch Mountain. I first named it in a magazine article I wrote about taking my first buck in this area back in 1990. I'll never forget that day.

It was the nearing daybreak of the final day our firearm hunting season when I sat down on a new, backpacked stool atop a pine covered outcropping overlooking a well-tracked whitetail browse area (full of red osiers) 300 yards west of Birch Mountain. As the first rays of sunlight began to stab through the forest behind me, I decided to give my buck grunt call a try. A doe immediately emerged from a clump of black spruces north where I sat and halted, appearing to be searching for the buck that made that sound. When it finally turned its head away, I raised my call and gave it a second grunt. With that the doe turned and began heading straight toward me. Then from the spruce clump behind her an eight-point buck burst into sight, closely trailing her. At 7 a.m., the two deer halted 20 yards in front of me. At my shot, the buck dropped in its tracks and the doe bounded off, halting about 100 feet away and turning toward me. That was one upset doe. It repeatedly snorted all the while I was field dressing the buck, and when I began dragging the buck away, it followed me, snorting again and again. I finally turned and said to the doe, "That's what you get for fooling around. Now leave me alone and go find another buck," which it apparently did.

By this time I knew I was in for a long, tough day. That buck was plenty heavy, the snow was more than a foot deep and I was alone and a long way from camp (my kids were back home in school or college).

Then something strange happened: dogs began growling and barking not far behind me. I soon concluded they couldn't be dogs. This was a deep, roadless, wilderness region. Those animals had to be timber wolves, probably fighting over the entrails from my buck. Now thoroughly spooked, I attempted to move faster, but it was impossible. That buck was simply too heavy. Upon finally making my way to the top of Birch Mountain, I stopped to rest and consider what to do. Fearing those wolves would soon be following me, I decided to lighten my load by cutting off the buck's hind quarters, hanging them as high as possible in an adjacent clump of birch trees. A half hour later I was my way again, spurred on by occasional wolf howls behind me. I made it back to camp an hour after sunset, 11 long hours after shooting that buck.

About 10 a.m. the following morning, with a pack frame on my back I struggled back up the east slope to the top of Birch Mountain. The snow around the birch clump was full of wolf tracks. Happily, however, I discovered those hind quarters had been hung high enough. They were untouched. After lowering them to the ground, I lashed them to my pack frame and headed back toward camp.

Just short of the creek crossing, I suddenly spotted a yearling buck (forky) facing me about 20 yards ahead, downwind. Yearlings are not uncommonly over-curious, but this one was different. It wasn't stomping the ground like they often do in a situation like this, trying to make me do something that would help reveal my identity and/or intention. It was simply sniffing. It occurred to me it probably smelled the powerful dominant buck musk being emitted from the tarsal glands on the legs of the hindquarters on my back, likely an intense odor familiar to this deer. Though I smelled like the big buck, to this young deer I had to be a very strange looking deer, especially with those two big hooves sticking straight up above my shoulders. The forky finally decided it might be best to be somewhere else and trotted away, tail down, ending the last notable event of that long-remembered hunt. 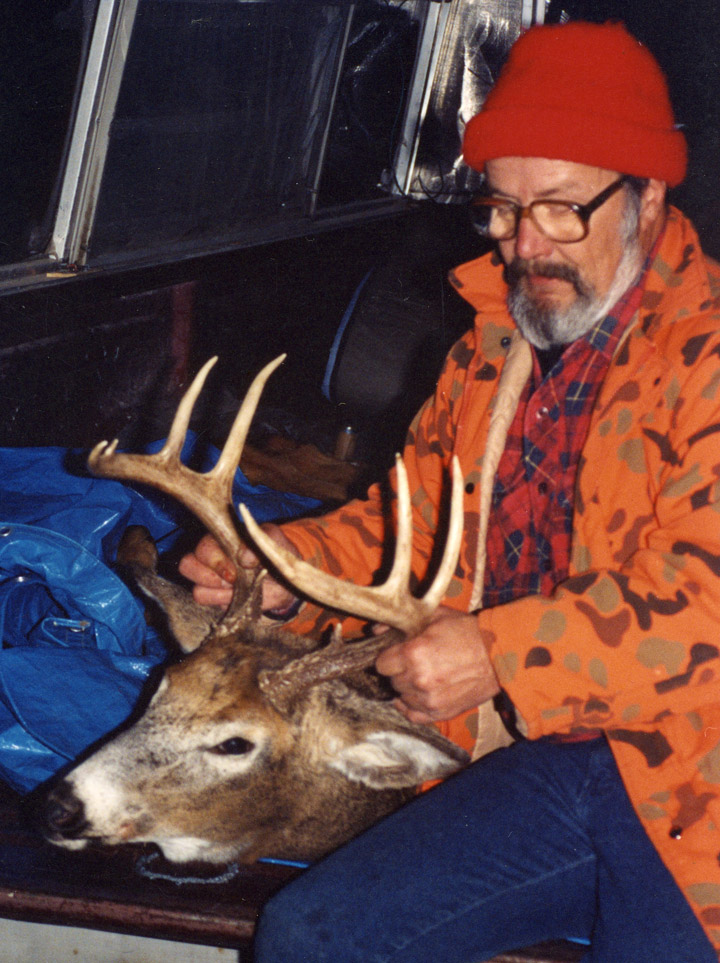 As Ken and I began rounding the northern slope of Birch Mountain, paralleling the picturesque, rock-strewn stream at its base, I spotted blaze-orange. Ryan was sitting on the opposite bank far ahead and Ken's hunting coat was hung in a young tree behind him, an effective way to keep wolves at bay from a deer carcass for a day or so. As we drew nearer, I could see the deer. It appeared to be another of those 300-pound-plus bucks (live weight) we Nordbergs occasionally take in this wolf country. Bucks smart enough to continually evade wolves survive more hunting seasons than others and thus a few we take are in their absolute prime weight-wise. When I finally got a good look at this buck's unusually tall and heavy antlers, all I could say was, "Wow, what a buck!" Antler-wise, it was the biggest ever taken by any of us since we first began hunting here.

It happened just like I dreamt it would," Ken related (he dreams about taking big bucks like his father). "About a quarter after seven the buck came down from that big hill on the north side of the river (big bucks of wolf country like to bed near crests of high hills, rarely far from water) to drink and cross to my side on that trail on Ryan's left. It looked huge, just like I expected it would look. When it stopped to drink on that side of the river, I could wait no longer. At the shot it went right down. I had an awful time pulling out of the river, up onto that north bank. It would have been much more difficult to pull it out on my side.

"When I found that unusual, well-used trail where deer had been crossing the river in October," Ken explained, "I knew this would be a great stand site. It's funny. We've always hunted in this area assuming all the deer we see live on our side (the south side) of the river. This trail proved otherwise. When Ryan and I scouted here in October, the newly logged hill-side above the treeline on our side was full of all sizes of deer droppings and tracks, including some inch-long droppings and four-inch-long tracks (not including dewclaws), obviously made by a big buck. I figured any buck that lived in that virtually unhunted area on the other side of the river might be especially big. I've got a picture of a big buck at home entitled, 'River Bottom Buck.' This one looks just like that buck. 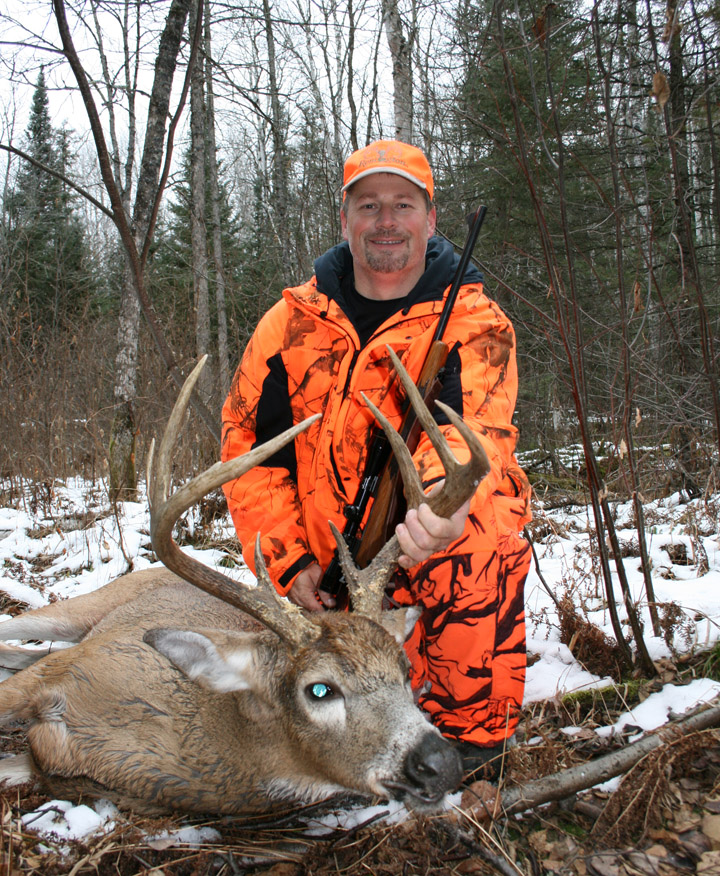 I didn't see a deer here on opening morning, but this woods with this river gurgling through it is so beautifully that I didn't mind a bit. It's a wonderful place just to sit. And," Ken added, "I think this will be a great spot to hunt bucks for many years to come."